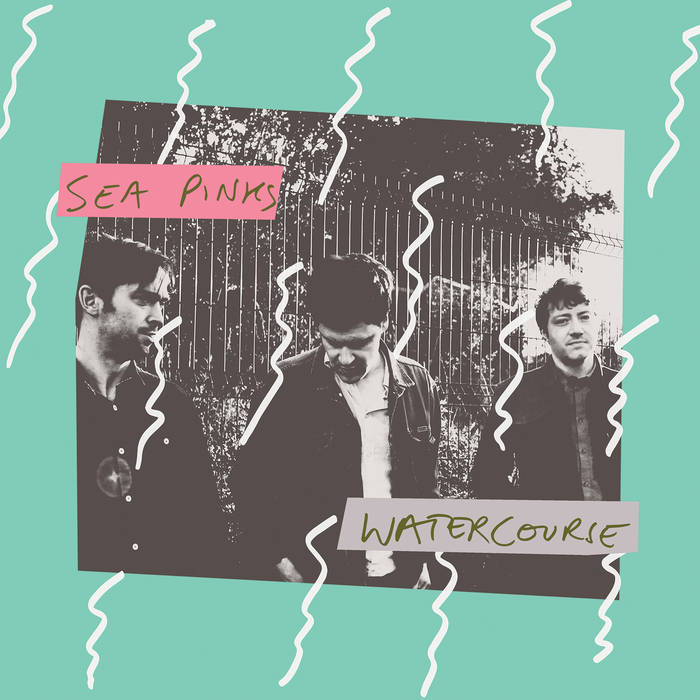 Watercourse is the new LP from Sea Pinks, Belfast’s finest purveyors of bittersweet guitar pop since 2010. Their sixth album sees them picking up where 2016’s acclaimed Soft Days left off, refining and elaborating on the dream/power pop dynamic of that album, while still managing to sound as fresh as a band making their debut. Each song is a pure outsider pop gem, with effervescent choruses, buoyant drums and a distinctive woozy guitar style, all wrapped in a mischievous sense of humour.

The now well established line up of Neil Brogan on guitar and vocals, Steven Henry on bass and Davey Agnew on drums convened at Belfast’s Start Together studios with engineer Ben McAuley in summer 2016 with the initial plan of making an EP. “We’re a singles band hellbent on making albums,” says Neil. “We went in for a couple of days. Then it was a couple more and a couple more, and by autumn we had about 16 songs recorded, which we eventually pared down to ten”. Two-thirds of the record was mixed by the band with Ben McAuley, the remaining songs went to Collin Dupuis (whose credits include Angel Olsen’s My Woman) which helped to bring out some light and shade.

Throughout Watercourse there’s a definite sense of homecoming, with plenty of twists and turns on the way. This is borne out in the contrasting sides of the LP, as the band’s signature dream pop jangle on side one gives way to a harder edged, more brittle punk-inspired power pop on side two. As Neil explains; “The songs on side one are all about movement. They are dreamy and more upbeat. Side two is more about being static, whether it’s a fixed place or a moment in time. They are more urgent sounding and a little more bittersweet.”

With ten songs in thirty-three minutes, the result is tight, fast paced and emotionally charged. From the vibrant optimism of the title track, through the fatalistic defiance of single “Into Nowhere”, deep sea reveries on “I Don’t Know What I Would Do…” and anthemic contempt on “How Long Must I Be Denied”, to the more reflective uncertainty of “Shock of The New” and the wry euphoria of closer “Pining Away”, the band wends it way, shape shifting as they go. “I do think we are still improving as a band, and this is the best record we’ve made as a three piece,” says Neil. “It may surprise a few people, maybe not. We’re often typecast as being a particular thing, be it surf or jangle-pop or whatever, which can be reductive. The songs are the thing with us.”

Album of the Week - Irish News